SiO2 sols were prepared by hydrolysis and condensation reactions of tetraethyl orthosilicate through a one step acid or a two step acid + base catalysis process, in the presence of nitric acid and four different base catalyzers, namely trimethylamine, triethylamine, tripropylamine and tributylamine. Hydrolysis of TEOS was followed by FT-IR analyses. Particle size distributions of the sols were evaluated after predetermined durations in 1–22 days. Particle growth was seen to be faster in amine catalyzed systems than in one step acid catalyzed system. The highest rate of growth was in triethylamine catalyzed system. Glass substrates were dip coated with the prepared SiO2 sols. Effect of sol aging duration on film thickness and on light transmittance properties of the films was investigated with respect to type of base catalyst. Thicknesses of the films which were measured to be in the range of 100–400 nm, were seen to increase with aging duration of the sols. Triethylamine catalyzed system presented the highest film thickness. Films obtained from one step acid catalyzed system presented an increase of 4.8%; whereas acid + base catalyzed films provided an increase in the light transmittance of 5.7% in the first 4 days of aging. Surfaces of films were examined by FESEM and AFM. The antireflective character of the films was verified by diffuse reflectance analyses. 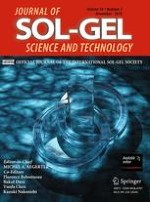