In this study, the Vickers hardnesses and room-temperature uniaxial tensile behaviors of four Fe66−x CrNiB x Si (x = 0 (0B), 0.25 (25B), 0.50 (50B), and 0.75 (75B) wt pct) advanced high-strength steels (AHSSs) in the as-hot-rolled and heat-treated (1373 K (1100 °C)/2 h + 973 K (700 °C)/20 min) conditions were investigated. Microstructural evolution after solidification, hot rolling, heat treatment, and uniaxial tensile tests of 0B, 25B, 50B, and 75B AHSSs was also characterized using field emission gun scanning electron microscopy and X-ray diffraction. The tensile behaviors of the 0B, 25B, 50B, and 75B AHSSs were manifested by an excellent combination of strength and ductility over 34.7 and 47.1 GPa pct, 36.9 and 42.3 GPa pct, 45.9 and 46.4 GPa pct, and 11.9 and 47.8 GPa pct, respectively, arising from microband-induced plasticity in the 0B, 50B, and 75B AHSSs and transformation-induced plasticity in the 25B specimens. All specimens in the as-hot-rolled and heat-treated states showed an austenitic matrix grain. Adding boron to the base alloy (0B) resulted in grain refinement, M2B dispersion, precipitation hardening, and solid solution strengthening, which led to an increase in strength. The results of the present work show promise for automotive applications that require excellent properties and reduced specific weight. 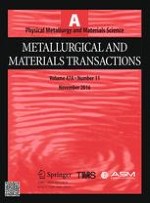 On the Tendency of the Co-, Ni-, and Fe-Based Melts to the Bulk Amorphization