Al doped zinc oxide (AZO) thin films were deposited on AZO buffered glass substrates by DC magnetron sputtering. The effect of buffer thickness on the electrical, structural, morphological, and optical properties of the AZO thin films was studied experimentally. As the buffer thickness increased, the resistivity of AZO thin film decreased from 6.4 × 10−4 Ω cm (no buffer) to 3.8 × 10−4 Ω cm (160-nm-thick buffer) and the corresponding mobility increased from 33.4 to 51.2 cm2/Vs,resulting from an improvement of crystallinity. The haze factor of the AZO thin films increased with increasing buffer thickness up to 160 nm, and then slightly decreased. A high average haze factor of 56.7% in the range from 400 to 1100 nm was obtained in the thin film that incorporated a 160-nm-thick buffer, which was attributed to the large feature size of the craters on the surface and the high RMS surface roughness. 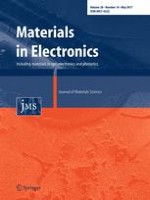 Special issue on selected papers on optical, optoelectronic and photonics materials and applications