Sodium and organic modified montmorillonite (MMT) clays were used to prepare poly(vinyl acetate)-based nanocomposites through a semi-continuous emulsion polymerization process. Poly(vinyl alcohol) (PVOH) in aqueous solution (7.5 and 10 wt% based on monomer), ammonium persulfate and sodium bicarbonate acted as polymeric stabilizer, initiator and pH regulator, respectively. The stabilization of the system was provided only by PVOH, with no additional surfactant. The materials were characterized by dynamic light scattering (DLS), transmission electron microscopy (TEM), dynamic-mechanical analysis (DMA), thermogravimetric analysis (TGA), and X-ray diffraction (XRD). Results showed that latexes prepared with 10 wt% PVOH presented better colloidal stability compared to the ones synthesized with 7.5 wt%. The coagulum content of hybrid latexes prepared with 10 wt% PVOH were lower than 0.1%, and the presence of clay reduced the coagulum content up to 50% in comparison with pure PVAc. The reaction kinetics and the final properties of the hybrid materials were influenced by the presence of clay. Lower monomer conversion was observed at initial stages of polymerization when more hydrophobic clays were used. Hybrid latexes with reduced particle size and low viscosity were obtained at the end of polymerizations performed in the presence of MMT. The polydispersity of pure and hybrid latexes was observed in both DLS and TEM. The hybrid films exhibited improved mechanical and thermal properties, as deduced from DMA and TGA results, respectively. XRD measurements showed that nanocomposites with intercalated structures were formed when hybrid latexes were synthesized with organic modified MMT, whereas exfoliated structure was obtained when preparing the latex with sodium MMT. The hybrid materials with improved physicochemical, mechanical and thermal properties obtained in this study may represent a new approach to preparing waterborne polymer for several relevant industrial application, such as adhesives. 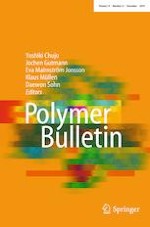 ZnFe2O4@SiO2@Tragacanth gum nanocomposite: synthesis and its application for the removal of methylene blue dye from aqueous solution

Radiation-resistant properties of cross-linking PTFE for medical use