Rock joint surface roughness, which influences the shear resistance of joints, dictates the stability of rock blocks. However, there is a weakening effect on the shear behavior of a rock joint as it becomes “un-matching” caused by external factors, such as vibration due to nearby blasting, excavation or earthquake. This paper presents an experimental investigation of the shear behavior of artificial rock joints under different matching conditions by direct shear test, modeled by imposing varying magnitude of horizontal dislocation along the shear direction between the upper and lower rock blocks. The peak shear strength decreases with increasing dislocation. However, the effect of dislocation on peak shear strength becomes less pronounced as the normal stress increases. With increasing dislocation, the peak shear displacement increases; the shear stiffness decreases and gradually approaches a constant. The influence of dislocation on shear stiffness is more prominent under a higher applied normal stress. The results also show that the peak shear strength of matching joints is influenced mostly by shear velocity. 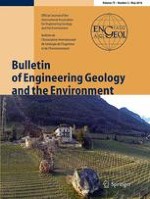 Kinematic characteristics and dynamic mechanisms of large-scale landslides in a loess plateau: a case study for the north bank of the Baoji stream segment of the Wei River, China

The relationships between the rock material properties and weathering grades of andesitic rocks around İzmir, Turkey