Spot continual induction hardening (SCIH) is a surface heat treatment process, which can strengthen more than one small area or relative large area on complicated component surface. In order to investigate the microstructure and mechanical properties of gray cast iron with curved surface after SCIH, the microstructure, microhardness and residual stresses were analyzed under different process conditions. The results showed that the martensite grain in hardened region of concave surface was larger than that of convex surface. The domain sizes of concave and convex surfaces were smaller than that of matrix region due to the high heating rate in SCIH process. The phase transformation depth increased with the increasing of convex surface radius but decreased with the increasing of concave surface radius. The maximum values of residual tensile and compressive stresses increased with the increasing of feed velocity for convex and concave surfaces, respectively. The appearance positions of maximum tensile and compressive stresses were closer to center for convex and concave surfaces, respectively, when feed velocity increased from 1 to 5 mm/s. The achieved results indicated that the SCIH with relatively low feed velocity was more suitable for improving the mechanical properties of gray cast iron. Compared with convex surface, the concave surface of workpiece can obtain better mechanical properties under the same feed velocity of inductor. 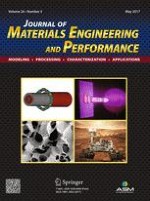 Method to Predict Tempering of Steels Under Non-isothermal Conditions