The effect of microstructure on clad/core interactions during the brazing of 4343/3005/4343 multi-layer aluminum brazing sheet was investigated employing differential scanning calorimetry (DSC) and electron back-scattering diffraction (EBSD). The thickness of the melted clad layer gradually decreased during the brazing operation. It could be completely removed isothermally as a result of diffusional solidification at the brazing temperature. During the brazing cycle, the rate of loss of the melt in the brazing sheet, with small equiaxed grains’ core layer, was higher than that with the core layer consisting of elongated large grains. The difference in microstructure affected the amount of liquid formed during brazing. 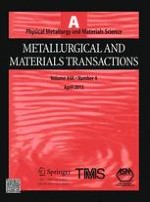 Understanding the Shape-Memory Behavior in Ti-(~49 At. Pct) Ni Alloy by Nanoindentation Measurement

Extrusion, Properties, and Failure of Spray-Formed Hypereutectic Al-Si Alloys Based on the Optimization of Fe-Bearing Phase