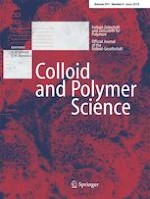 Nanoparticles based on a PEGylated methacrylate copolymer as vehicles for hydrophilic antimicrobial additives: a study on chemical interactions with a benzoic acid probe molecule