Elevated-temperature wear tests were performed on AISI H13 steel under 50 and 100 r/min at 400–600 °C. Through examining the morphology, structure and composition of worn surfaces as well as the microhardness at subsurfaces, the wear mechanisms in various sliding conditions were explored. H13 steel exhibited totally different elevated-temperature wear behavior at two sliding speeds while the high sliding speed would seriously deteriorate its wear resistance. During sliding at two sliding speeds, the wear rate of H13 steel decreased first and then rose with the increase in temperature and the wear rate reached the lowest value (lower than 1 × 10–6 mm3/mm) at 500 °C and 50 r/min. The wear rate at 600 °C was lower than that at 400 °C for 50 r/min, but the wear rate at 600 °C was higher than that at 400 °C for 100 r/min (except for 50 N). At 50 r/min, the wear rate decreased first and then increased with the increase in load. However, at 100 r/min, the wear rate monotonically increased with increasing load and reached 33 × 10–6 mm3/mm at 600 °C and 150 N, where severe wear occurred. In the other sliding conditions, severe wear did not appear with wear rate lower than 5 × 10–6 mm3/mm. Oxidative mild wear merely prevailed at 500 °C and 50 r/min and oxidative wear appeared in the other sliding conditions except for 600 °C and 150 N, where severe plastic extrusion wear prevailed. The effect of sliding speed on wear behavior was attributed to the changes of tribo-oxide layers. During elevated-temperature sliding, tribo-oxide particles were more readily retained to form protective tribo-oxide layers on worn surfaces at the lower sliding speed than at the higher sliding speed, so as to protect from wear. 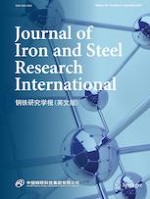