The thermodynamics and kinetics of Silicon (Si) segregation to grain boundaries in Iridium alloy DOP-26 with added trace levels of Si of 6, 11, 29, and 36 wppm was studied by Auger Electron Spectroscopy. The four alloys were annealed at 1500 or 1535 °C for 19 or 76 hours followed by cooling at three different rates. Si enrichment at the grain boundaries (GB) increased with increasing bulk Si content, with the grain boundary Si enrichment factors ranging from 62 to 344, depending on the bulk Si content and the cooling rate. Grain boundary Si contents increased with decreasing cooling rate in all alloys, indicating that Si GB segregation is influenced by both thermodynamic and kinetic factors in the alloys and temperature ranges of the study. A Langmuir-McLean isotherm-based model was successfully used to predict the temperature dependence of GB Si segregation in DOP-26 alloys with Si additions and estimate the temperature independent free energy of Si segregation to grain boundaries in DOP-26. 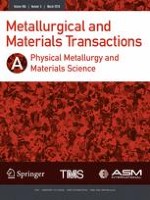 Topical Collection: Next Generation Superalloys and Beyond

Topical Collection: Next Generation Superalloys and Beyond