The effect of welding speed on the microstructural evolution, mechanical properties and strain-hardening behavior of friction stir welded (FSWed) high-strength AA7075-T651 was investigated. Large intermetallic particles and grains, whose sizes increased at lower welding speeds, were present in the heat-affected zone. FSWed joints fabricated at the higher welding speed or lower strain rates exhibited higher strength, joint efficiency and ductility than those fabricated at lower welding speeds or higher strain rates. A maximum joint efficiency of 97.5% and an elongation to failure of 15.9% were obtained using a welding speed of 400 mm/min at a strain rate of 10−5 s−1. The hardening capacity, strain-hardening exponent and strain-hardening rate of the FSWed joints were significantly higher than those of the base material, but materials exhibited stage III and stage IV hardening characteristics. The results morphology of the fracture surfaces is consistent with the above results.
Anzeige
Vorheriger Artikel Crack Initiation and Growth Behavior of Cold-Sprayed Ni Particles on IN718 Alloy
Nächster Artikel Influence of SMAT Parameters on Microstructural and Mechanical Properties of Al-Mg-Si Alloy AA 6061 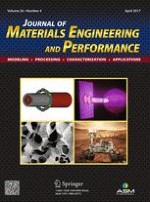 Retraction Note to: All-Atom Molecular-Level Analysis of the Ballistic-Impact-Induced Densification and Devitrification of Fused Silica