The effective viscosity of a dilute emulsion of spherical drops containing a soluble surfactant is calculated under a linear creeping flow. It is assumed that convection of surfactant is small relative to diffusion, and thus the Peclet number, Pe, is small. We calculate the effective viscosity of the emulsion to \(\mathcal {O}(Pe\phi \mu )\), where ϕ is the small volume fraction of the dispersed drops and μ is the viscosity of the surfactant-free suspending fluid. This \(\mathcal {O}(Pe\phi \mu )\) contribution is a sensitive function of the bulk and interfacial surfactant transport. Specifically, soluble surfactant molecules diffuse from the bulk to the interface and then adsorb to the interface. The ratio of the time scale for bulk diffusion to the time scale for adsorption to the interface is quantified by a Damkohler number, Da. The adsorption of surfactant to the interface may cause a significant decrease in the bulk concentration, which is known as depletion. The impact of depletion is characterized by two parameters: h, which is a dimensionless depletion depth; and k, which is the ratio of the desorption time scale to the adsorption time scale. We analytically determine how the \(\mathcal {O}(Pe\phi \mu )\) contribution to the effective viscosity depends on h, k, and Da. Surprisingly, for certain regimes in the h − k − Da parameter space, we predict the effective viscosity of the emulsion to be greater than Einstein’s result for the viscosity of a suspension of rigid spheres. Large Marangoni stresses driven by convective transport of soluble surfactant molecules are responsible for this result. 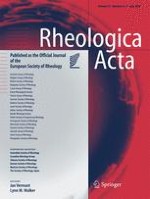 Rheological and sensory properties of toothpastes