In traditional OLAP systems, roll-up and drill-down operations over data cubes exploit fixed hierarchies defined on discrete attributes, which play the roles of dimensions, and operate along them. New emerging application scenarios, such as sensor networks, have stimulated research on OLAP systems, where even continuous attributes are considered as dimensions of analysis, and hierarchies are defined over continuous domains. The goal is to avoid the prior definition of an ad-hoc discretization hierarchy along each OLAP dimension. Following this research trend, in this paper we propose a novel method, founded on a density-based hierarchical clustering algorithm, to support roll-up and drill-down operations over OLAP data cubes with continuous dimensions. The method hierarchically clusters dimension instances by also taking fact-table measures into account. Thus, we enhance the clustering effect with respect to the possible analysis. Experiments on two well-known multidimensional datasets clearly show the advantages of the proposed solution. 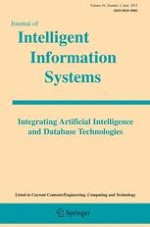