Ultrahigh carbon steels (UHCS) containing 1 wt pct Cr (1Cr UHCS) were heat treated at 1073 K, 1173 K, or 1243 K (800 °C, 900 °C, or 970 °C) for durations of 5 minutes up to 24 hours to study cementite coarsening. Results were compared to a previous study on coarsening of a UHCS with 4 wt pct Cr (4Cr UHCS) and significantly different behavior was observed. In the heat-treated 1Cr UHCS, particles clustered in zones that were tens of microns near branches of the cementite network. The opposite trend was observed in the 4Cr UHCS, in which the regions within a few microns near the cementite network were entirely denuded of particles. Causes for differences in coarsening behavior in 1Cr and 4Cr UHCS are discussed. 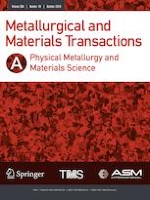