In this study, the effects of electron beam welding on the microstructure, microhardness, and electrical conductivity of precipitation-hardened Cu-0.804%Cr-0.063%Zr (wt.%) alloy plates were investigated. Experiments were carried out following a central composite design of experiments. Five welding schedules yielding the higher hardness were chosen and then were subjected to standard metallographic and various microscopy techniques to reveal the type, morphology, and distribution of the precipitates and to obtain the sub-structural information from the weld zone. X-ray diffraction studies revealed predominant formation of intermetallic phases in the welded zones of some of the samples, which could have resulted in higher hardness and better electrical conductivity compared to those of other ones. Microhardness values in the fusion zone and heat-affected zone were found to be less than that of the parent material. The mechanism of damage in Cu-Cr-Zr plates due to welding was also explained. 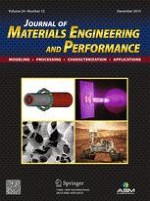