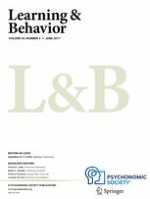 Capuchin monkeys can make and use stone tools

Effects of effort and difficulty on human preference for a stimulus: Investigation of the within-trial contrast