This study developed and compared two augmented reality learning systems for third-grade students to learn English vocabulary in situated surroundings. One system was developed based on a collective game-based (CGB) design, in which the students had to collect all seven reality targets without being restricted as to which they could start from. The other system was developed based on a sequential-mission gaming (SMG) design, which provided the students with seven stages to complete in sequence. The effects of gender and system on the students’ flow experience, cognitive load, and learning effectiveness were assessed. The results indicated that the students using the two systems had similarly high learning effectiveness. However, those using the CGB system revealed higher flow experience and lower intrinsic cognitive loads in comparison with those using the SMG system. The male students had high flow experience in both systems; however, the flow experience of the females in the CGB system outperformed that of the females in the SMG system. 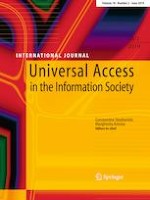 An interaction framework for supporting the adoption of EHRS by physicians

A virtual reality tool for training in global engineering collaboration