The aim of this study was to determine the effect of jigsaw cooperative learning and computer animation techniques on academic achievements of first year university students attending classes in which the unit of chemical bonding is taught within the general chemistry course and these students’ learning of the particulate nature of matter of this unit. The sample of this study consisted of 115 first-year science education students who attended the classes in which the unit of chemical bonding was taught in a university faculty of education during the 2009–2010 academic year. The data collection instruments used were the Test of Scientific Reasoning, the Purdue Spatial Visualization Test: Rotations, the Chemical Bonding Academic Achievement Test, and the Particulate Nature of Matter Test in Chemical Bonding (CbPNMT). The study was carried out in three different groups. One of the groups was randomly assigned to the jigsaw group, the second was assigned to the animation group (AG), and the third was assigned to the control group, in which the traditional teaching method was applied. The data obtained with the instruments were evaluated using descriptive statistics, one–way ANOVA, and MANCOVA. The results indicate that the teaching of chemical bonding via the animation and jigsaw techniques was more effective than the traditional teaching method in increasing academic achievement. In addition, according to findings from the CbPNMT, the students from the AG were more successful in terms of correct understanding of the particulate nature of matter.

Titel
Effects of Jigsaw Cooperative Learning and Animation Techniques on Students’ Understanding of Chemical Bonding and Their Conceptions of the Particulate Nature of Matter
Autoren:
Ataman Karacop
Kemal Doymus 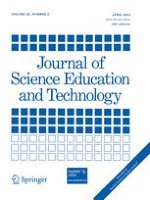 The Effectiveness of Concept Maps in Teaching Physics Concepts Applied to Engineering Education: Experimental Comparison of the Amount of Learning Achieved With and Without Concept Maps