» Jetzt Zugang zum Volltext erhalten
Wichtige Hinweise
Manuscript submitted April 5, 2006.
In the present study, effects of notch shape and specimen thickness on drop-weight tear test (DWTT) properties of API X70 and X80 line-pipe steels fabricated by varying hot-rolling conditions were investigated. The DWTT was conducted on the rolled steels, and the results were discussed in comparison with the Charpy V-notch (CVN) impact test and crack-tip opening angle (CTOA) test data. The DWTT results indicated that the steels rolled in the single-phase region had the higher upper shelf energy (USE) than the steel rolled in the two-phase region, because their microstructures were composed of acicular ferrite (AF). The DWTT energy transition temperature (ETT) of the steel rolled in the two-phase region was the lowest, because it had a finer effective grain size and the lowest volume fraction of hard secondary phases. Chevron notch (CN) DWTT energy density did not increase much with increasing specimen thickness, whereas pressed notch (PN) DWTT energy density increased by 1 to 3 J/mm2, because the total energy of the CN DWTT increased less than that of the PN DWTT due to the larger stress concentration at the CN. The ETT increased with increasing specimen thickness due to the increase in constraint state, and the ETT of the CN DWTT was slightly lower than that of PN DWTT. The measured CTOA showed better correlation with the DWTT propagation energy than with the CVN or DWTT total energy because it was related to the crack propagation speed. The value of sin (2CTOA) reliably showed a linearly proportional relation with the DWTT propagation energy density. 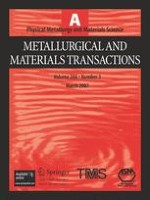