Surface modification of carbon nanotubes (CNTs) is a promising method to control the properties of a CNT/polymer system. Recent research has been directed toward chemical attachment of polyhedral oligomeric silsesquioxane (POSS) moieties to the CNT surface. POSS modification of CNTs can affect both the quality of CNT dispersion in the matrix and the interactions between polymer chains and nanotubes at the interphase region. The goal of the current study is to investigate these effects. Accordingly, nanocomposites containing POSS-modified CNTs, unmodified CNTs, and POSS were fabricated by infusion of 0.25, 0.5, and 1.0 wt% particles into a vinyl ester (VE) resin. Mechanical and thermal properties of experimental materials were evaluated using three-point bending, differential scanning calorimetry, and thermogravimetric analysis methods. The state of particle distribution/dispersion in VE matrix was also observed. Optical microscopic studies showed that both POSS/VE and CNT/VE nanocomposites possess local agglomeration. This was more extensive in CNT/VE system. However, CNT-POSS/VE systems showed a fine-textured microstructure with homogeneous distribution of CNT-POSS hybrids into VE resin. This indicates that the dispersibility of CNTs improved due to POSS functionalization. Scanning electron microscopy (SEM) of fracture surfaces revealed apparent de-bonding of agglomerates from the matrix in both POSS/VE and CNT/VE system, which is in agreement with the observed drop in their fracture strain. On the other hand, SEM studies of nanocomposites containing POSS-modified nanotubes revealed formation of a 3D network of well-dispersed CNT-POSS hybrids. SEM analysis further indicated the occurrence of a fracture mechanism with enhanced interactions between individual CNTs and VE matrix. This stiff and flexible network of individual CNTs is responsible for enhancement in elastic modulus, glass transition, and thermal decomposition temperatures of CNT-POSS/VE nanocomposites. 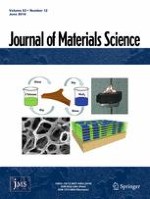