Cr-doped ZnO thin films with Cr content of 2 at.% were deposited on glass substrates with various sputtering powers by radio frequency magnetron sputtering technique. The effects of the sputtering power on the crystallographic structures, electrical and optical properties of the thin films were investigated by means of X-ray diffraction (XRD), scanning electron microscopy (SEM), four-point probe measurement and UV–Vis spectrophotometer. The XRD patterns and SEM images indicated that the crystallinity of Zn0.98Cr0.02O thin films was markedly improved with sputtering power up to 150 W, but worsened above this value. The lowest electrical resistivity of 1.15 × 10−3 Ω cm was obtained at 150 W. The optical band gap of the films increased from 3.38 to 3.54 eV with increase of sputtering power from 110 to 170 W. The UV–Vis transmittance spectrum revealed that the films showed a high average transmittance of above 85 % in the visible range. 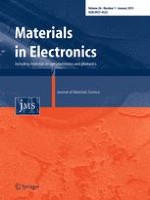