ZnTe thin films have been deposited at various temperatures about 110–160 °C onto FTO-coated glass substrates by low-cost, easy and simple non-aqueous electrodeposition method for using it in solar cell application. The optimized growth conditions are chosen for ZnTe layers by investigating the photoelectrochemical, optical, structural and morphological properties of the deposited films. Optical measurement of the p-type ZnTe films have higher transmittance in the UV–Visible region; moderate transmittance in the visible region and moderate to lower transmittance in the visible–infrared region and have higher absorbance in the middle of the visible region to near infrared region. Band gap values were estimated to vary from 2.23 to 1.8 eV for the ZnTe films deposited at different conditions. Band gap of ZnTe decreases when the films annealed at 300, 350 and 425 °C in nitrogen environment. From the XRD and SEM study the films deposited from 110 to 150 °C were elemental Te film but Zn was not deposited at this temperature. When the deposition temperature was increased to 160 °C and annealing at 425 °C, the films were found to be polycrystalline ZnTe films with (111) preferential orientation of the cubic structure and appeared dense crack-free surfaces with regular granular shaped grains without any cauliflower like appearance. After annealing and all characterization it was concluded that ZnTe thin film can be deposited at 160 °C for 40 min at −0.75 V. 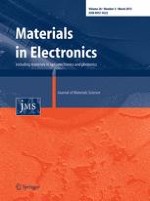