Na0.5Bi0.5(Ti0.98Nb0.01Fe0.01)O3 (NBTNbFe) thin films with different thicknesses (90, 400 and 700 nm) were fabricated on indium tin oxide/glass substrates via a metal organic decomposition method. The effects of thickness on crystallization, microstructure, ferroelectric and dielectric properties were characterized. Each thin film shows single perovskite structure without any detectable secondary phase. Compared with 90 and 400 nm-films, 700-nm-thick film exhibits a large remnant polarization (P r ) of 12 μC/cm2 and a big dielectric tunabillity of 40% due to the improvement of insulativity. Also, a large ε r and a low tanδ are 497 and 0.07 can be obtained at 100 kHz for NBTNbFe with 700 nm thickness. The possible contributions were discussed to explain the differences in the related performances for NBTNbFe thin films with different thicknesses. Our investigation on thickness of NBTNbFe thin films suggest that adjusting thickness of film can be useful for ferroelectric material research. 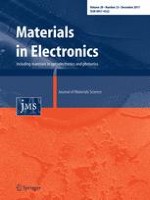 Correction to: Novel synthesis method for photo-catalytic system based on some 3d-metal titanates