Nearest neighbor in high-dimensional space has been widely used in various fields such as databases, data mining and machine learning. The problem has been well solved in low-dimensional space. However, when it comes to high-dimensional space, due to the curse of dimensionality, the problem is challenging. As a trade-off between accuracy and efficiency, c-approximate nearest neighbor (c-ANN) is considered instead of an exact NN search in high-dimensional space. A variety of c-ANN algorithms have been proposed, one of the important schemes for the c-ANN problem is called Locality-sensitive hashing (LSH), which projects a high-dimensional dataset into a low-dimensional dataset and can return a c-ANN with a constant probability. In this paper, we propose a new aggressive early-termination (ET) condition which stops the algorithm with LSH scheme earlier under the same theoretical guarantee, leading to a smaller I/O cost and less running time. Unlike the “conservative” early termination conditions used in previous studies, we propose an “aggressive” early termination condition which can stop much earlier. Though it is not absolutely safe and may result in the probability of failure, we can still devise more efficient algorithms under the same theoretical guarantee by carefully considering the failure probabilities brought by LSH scheme and early termination. Furthermore, we also introduce an incremental searching strategy. Unlike the previous LSH methods, which expand the bucket width in an exponential way, we employ a more natural search strategy to incrementally access the hash values of the objects. We also provide a rigorous theoretical analysis to underpin our incremental search strategy and the new early termination technique. Our comprehensive experiment results show that, compared with the state-of-the-art I/O efficient c-ANN techniques, our proposed algorithm, namely EI-LSH, can achieve much better I/O efficiency under the same theoretical guarantee. 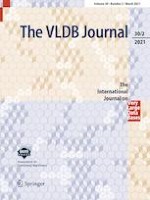