Eighth Wonder of the Western World: the Survival of African-Americans in a Hostile Environment | springerprofessional.de Skip to main content
SUCHE MENÜ 1 2 3 4

The seven Western claimed wonders of the world were compiled by Greek poet Antipater. Not normally acknowledged, the survival of African descended peoples in a hostile Western environment is essential for appreciation of the seven wonders. In the midst of colorism and stereotype, the stresses associated with African-American skin color have been trivialized because color is all but Eurocentric irrelevant. Such colorism facilitates stereotype erroneously acted out as racism. Hence, transgression by racism is in fact transgression by colorism. In the aftermath is operation of criminal stereotypes and African-Americans as less intelligent that exacts consequences upon their survival. African-American survival is miraculous enduring not only historical lynching in northern locations such as Minnesota but death by state-sanctioned suffocation in the same state. Subsequently, commensurate with the towering monuments of Western civilization is the towering survival of African-Americans in a hostile environment commencing to eighth wonder of the Western world.
Anzeige
Vorheriger Artikel Revolution or Death: The Life of Eldridge Cleaver, by Justin Gifford. Chicago, IL: Lawrence Hill Books, 2020. $28.99 Hardback. 331 Pages
Nächster Artikel Jelinek, Donald A. (2020). White Lawyer, Black Power: a Memoir of Civil Rights Activism in the Deep South

Titel
Eighth Wonder of the Western World: the Survival of African-Americans in a Hostile Environment
verfasst von
Ronald E Hall 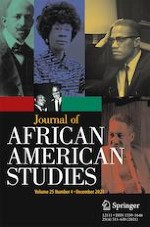 Vanguards in the Classroom: History and Lessons from the Black Panther Party’s Oakland Community School