Standard measures of local deformation such as deformation gradient, strain, elastic deformation, and plastic deformation are dimensionless. However, many macroscopic and submacroscopic geometrical changes observed in continuous bodies result in the formation of zones across whose boundaries significant changes in geometry can occur. In order to predict the sizes of such zones and their influence on material response, theories of elasticity and plasticity have been employed in which second gradients of deformation, gradients of strain, as well as gradients of elastic or of plastic deformation are taken into account. The theory of structured deformations provides additive decompositions of first deformation gradient and of second deformation gradient, valid for large deformations of any material, in which each term has a multiscale geometrical interpretation corresponding to the presence or absence of submacroscopic disarrangements (non-smooth geometrical changes such as slips and void formation). This article provides a field theory that broadens the earlier field theory, elasticity with disarrangements, by including energetic contributions from submacroscopic “gradient-disarrangements” (limits of averages of jumps in gradients of approximating deformations) and by treating particular kinematical conditions as internal constraints. An explicit formula is obtained showing the manner in which submacroscopic gradient-disarrangements determine a defectiveness density analogous to the dislocation density in theories of plasticity. A version of the new field theory incorporates this defectiveness density to obtain a counterpart of strain-gradient plasticity, while another instance of elasticity with gradient-disarrangements recovers an instance of strain-gradient elasticity with symmetric Cauchy stress. All versions of the new theory included here are compatible with the Second Law of Thermodynamics.

Titel
Elasticity with Gradient-Disarrangements: A Multiscale Perspective for Strain-Gradient Theories of Elasticity and of Plasticity
Autor:
David R. Owen 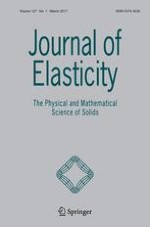 On the Decay Rates of Porous Elastic Systems