» Jetzt Zugang zum Volltext erhalten
Wichtige Hinweise
An earlier version of this paper was presented at the 2011 annual meeting of the American Political Science Association.

This paper explores the conditions under which democratic elections encourage citizens to identify with ethnicity. We argue that there are two mechanisms through which elections strengthen ethnic identification. First, the stronger ethnic parties are, the more intensive, ethnically exclusive political campaigns they carry out as an election approaches, resulting in strengthening citizens’ ethnic identity. Second, ethnic party mobilization drives members of other ethnic groups to develop stronger identity to their own ethnicity because such mobilization poses a serious political threat to the out-group members. Data analysis of approximately 18,000 respondents in five waves of the New Baltic Barometer supports the hypotheses. A case study of Latvia follows to illustrate that ethnic party mobilization for elections creates ethnic cleavages among the public. 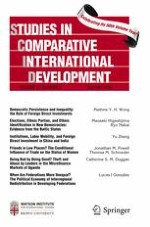 Democratic Persistence and Inequality: the Role of Foreign Direct Investments

When Are Federations More Unequal? The Political Economy of Interregional Redistribution in Developing Federations

Friends in Low Places? The Conditional Influence of Trade on the Status of Women

Doing Bad by Doing Good? Theft and Abuse by Lenders in the Microfinance Markets of Uganda