One of the important design criteria of micropropulsion systems in particular VLM is the type of microheater, its layout and placement with a view to achieve uniform heating of propellant, fast heat transfer efficiency with minimum input power. Thrust produced by microthruster not only depends on the structural geometry of the thruster and propellant flow rate, but also on the chamber temperature to produce super saturated dry stream at the exit nozzle. Detailed design of microheater in thermal and electrical domains using co-solvers available in MEMS software tools along with material’s thermal property, temperature dependence of electrical resistivity and thermal conductivity have been considered in the present work to achieve precise modeling and experimental accuracy of heater operation. The chamber temperature was analytically calculated and subsequently the required resistance and power were estimated. The boron diffused microheaters of meanderline configuration in silicon substrate has been designed and its finite element based electro-thermal modeling was employed to predict the heater characteristics. The variation of microheater temperature with time, applied voltage and along chamber length has been determined from the modeling. Subsequently the designed microheater was realized on silicon wafer by lithography and boron diffusion process and its detailed testing was evaluated. It was found that boron diffused resistor of 820 Ω can generate 405 K temperature with applied input power 2.4 W. Finally the simulated results were validated by experimental data. 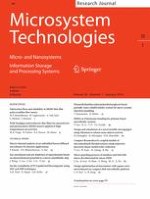 PMMA to Polystyrene bonding for polymer based microfluidic systems