The combined promotional effect of electrochemically-supplied O2− and chemically-supplied Na+ promoters, was studied for the case of CO oxidation on Pt/YSZ. Four different sodium coverages (0.16, 1.6, 8 and 40%) were loaded onto the catalyst surface and the catalytic behaviour was compared with a nominally ‘clean’ catalyst under a wide range of reactants’ ratios under open-circuit and polarised conditions. Sodium generally increased oxygen adsorption by lowering the work function of the catalyst. However, sodium promoted the catalytic rate only at coverages up to 1.6% and worked synergistically with O2− promoting species to an increased overall promotion of the catalytic rate. At higher sodium coverages, i.e. θNa ≥ 8%, the catalytic behaviour was strongly affected by the interactions between the sodium species, the catalyst, the reactants and oxygen ions promoting species. The postulated formation of stable sodium oxide species on the catalyst pores reduced the active catalytic area which resulted in poisoning the catalytic rate and suppressing EPOC effect, respectively. It is suggested that these stable sodium oxide species which also induced a permanent EPOC effect by oxygen storage, were formed by the migrated oxygen ions. 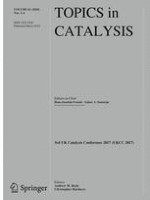 The Role of Catalyst Support, Diluent and Co-Catalyst in Chromium-Mediated Heterogeneous Ethylene Trimerisation