The present study aimed to see the effect of an applied electric field on the stability of a colloid system in which overall electroneutrality is maintained in a metastable state. We employed two polyelectrolyte nanogels (PENG) based on N,N′-methylenebisacrylamide (MBA)-cross-linked terpolymer composed of N-isopropylacrylamide (NIPA), acrylic acid (AAc) and 1-vinylimidazole (VI) and MBA-cross-linked copolymer of NIPA and VI. The complexes of these PENG particles with potassium poly(vinyl alcohol) sulfate (KPVS) were formed in an aqueous HCl solution (1 mM, pH 3) which allows a complete ionization of the PENG-fixed imidazole groups. The amount of KPVS anions was adjusted so as to become equivalent to that of PENG-fixed cations. The complex dispersion was electrolyzed in a simple cell made of a glass tube. A fine platinum wire was used as an electrode for both cathode and anode. It was suggested that the electrochemically induced increase in pH in the cathodic side causes the aggregation of the complex particles due to a partial dissociation of the bound polyanions from the complex. 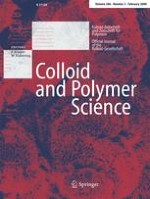