Estuarine ecosystems are easily deteriorated by organic pollution because of its high primary productivity. To identify chemical proxies for the possible sources of autochthonous organic matter [phytoplankton-derived particulate organic material (POM), macroalgae and seagrass], we measured C:N:P and the ratios of carbon and nitrogen stable isotopes (δ13C and δ15N values) in two estuarine environments, the polyhaline lagoon, Lake Nakaumi, and the oligohaline lagoon, Lake Shinji, in Japan. Due to vigorous photosynthesis, the δ13C of phytoplankton-derived POM in Lake Nakaumi was larger than what would normally be expected from estuarine salinity gradients. Concentrations of nitrogen and phosphorus did not affect the δ13C of phytoplankton-derived POM. The δ15N of all plants was uniform and was higher than the δ15N of sediments. The seagrass showed a higher C:N ratio than POM and macroalgae, while the macroalgae showed a higher N:P ratio. Thus, simultaneous evaluation of C:N and N:P ratios would distinguish these three plant groups, and it would be possible to identify the source plants from the elemental ratios of the sediments. 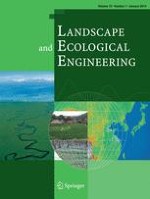 Ecological impacts of fire and postfire restoration in Korea

Interaction between patch area and shape: lakes with different formation processes have contrasting area and shape effects on macrophyte diversity

Erratum to: Effectiveness of rehabilitation treatments on a slowly revegetating hillslope in a recently burned coastal forest, Republic of Korea

Forest pattern dynamics and landscape connectivity changes in the Manwan Basin after dam construction in the Lancang River, China