Rehabilitation technology based on brain-computer interface (BCI) has become a promising approach for patients with dyskinesia to regain movement. In this paper, a novel classification algorithm is proposed based on the characteristic of electroencephalogram (EEG) signals. Specifically wavelet packet decomposition (WPD) and Extreme learning machine with kernel (ELM_Kernel) algorithm are studied. In view of the existence of cross-banding of WPD, the average energy of the wavelet packets of the corresponding frequency bands which belong to the mu and beta rhythm are used to form the feature vectors that are classified by the ELM_Kernel algorithm. Simulation results demonstrate that the proposed algorithm produces a high probability of correct classification of 97.8% and outperforms state-of-the-art algorithms such as ELM, BP and SVM in terms of both training time and classification accuracy. 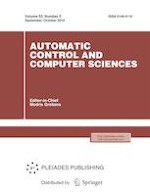 MAD-based Estimation of the Noise Level in the Contourlet Domain

Erratum to: Estimating the Speed of an Integrated Wireless Network for Transportation Applications