Understanding the biodiversity value of littoral zones of lakes is a priority for aquatic biodiversity conservation. However, less emphasis has been given to the littoral part of tropical African lakes, with many of the previous researches focusing only on the open water side. The aim of the present study was, therefore, to investigate the impact of the littoral zone of a shallow freshwater tropical lake (Ziway, Ethiopia), dominated by two emergent macrophytes, on zooplankton community structure. We hypothesized that the wetland vegetation serves as a preferred microhabitat for zooplankton communities. A lake with substantial coverage of emergent macrophytes was monitored monthly from January to August, 2016. The monitoring included the measurements of physical, chemical, and biological parameters. Sampling sites were selected to represent areas of the macrophyte vegetation (Typha latifolia and Phragmites australis) and the open water part of the lake. Sites with macrophyte vegetation were found to be the home of more dense and diverse zooplankton community. However, during the period of high vegetation loss, the density of crustacean zooplankton showed significant reduction within the patches of macrophytes. From biodiversity conservation perspective, it was concluded that the preservation of such small areas of macrophytes covering the littoral zone of lakes could be as important as protecting the whole lake. However, the rapid degradation of wetland vegetation by human activities is a real threat to the lake ecosystem. In the not-too-far future, it could displace and evict riparian vegetation and the biota it supports. 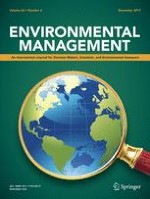 Using Paleoecology to Inform Land Management as Climates Change: An Example from an Oak Savanna Ecosystem

Exploring Institutional Mechanisms for Scientific Input into the Management Cycle of the National Protected Area Network of Peru: Gaps and Opportunities