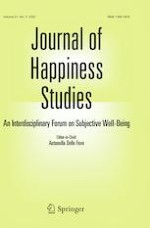 How Much Should We Pay for Mental Health Deterioration? The Subjective Monetary Value of Mental Health After the 27F Chilean Earthquake

The Relationship Between Nature Connectedness and Eudaimonic Well-Being: A Meta-analysis

Valuing the Relationship Between Drug and Alcohol Use and Life Satisfaction: Findings from the Crime Survey for England and Wales

Home Ownership and Subjective Wellbeing: A Perspective from Ownership Heterogeneity

Growth Motivation and Well-Being in the U.S., Japan, Guatemala, and India