The number and complexity of batteries in modern electric systems is constantly increasing. Consequently, the analysis and simulation of battery performance, dynamics, degradation, thermal and impedance characteristics is a vibrant field of research and scope of many recent publications (mostly considering Lithium-ion types). The generation of battery models has become a fundamental task to enable development and analysis of related electronic systems by simulation. Also in the field of electromagnetic compatibility (EMC) battery modeling is of growing relevance. Accurate depiction of battery’s impedance, charge and discharge processes are important for analysis of the electric networks they are part of, e.g. to understand and model conducted emission on attached cable harnesses [ 1, 2], radiated emission of the same [ 3] or to precisely predict current ripples produced by power electronic devices switching a battery-powered line [ 4]. In mentioned works, the battery is replaced with an equivalent circuit model which is a usual approach for network analysis.
Most authors aim to characterize the cell itself and exclude the influence of the battery’s housing or measurement fixture, e.g. by de-embedding or analytical correction [ 5, 6]. In [ 7] it is found that neglecting the outer casings of the cells and replacing the cell bodies with perfect electric conductors (PEC) is a suitable approach to speed up 3D simulations of large-scale traction battery systems. [ 8] is the only work known to the authors where focus is put on respecting the battery housing, although only for frequencies up to 110 MHz.
Advertisement
Commonly, battery models are based on measurements of the cell’s impedance conducted with an impedance analyzer or vector network analyzer (VNA). Often the focus is on the DC and low-frequency performance. To the authors’ knowledge [ 5] respects the highest frequency up to now which is 300 MHz. In this article, a model valid up to 1 GHz is exhibited.

Bulk current injection (BCI) is a component level test on conducted electromagnetic immunity (EMI) standardized by ISO 11452-4 [ 9]. It is widely used for testing automotive components. With an injection probe (basically an inductive current transformer) a radio frequency (RF) disturbance current from 100 kHz – 400 MHz is induced to the application-typical cable harness under application-typical loading conditions. At each frequency point the device under test (DUT) is checked for failure. For this work a simplified (academic) version of the setup was used as illustrated by Fig.  1. BCI tests were executed in the EMC lab of the Institute of Electronics at Graz University of Technology, Austria. Instead of a cable harness which typically has many unknown parameters, a well-defined copper rod of 5 mm diameter and 1 m length is mounted to a metallic fixture where it is terminated with 50 \(\Omega \). The injection probe (FCC F-120-6A) is placed at the middle of the rod. A monitoring probe (FCC F-171117- 1005-1) measures the rod current in 5 cm distance from the DUT. The latter is an ungrounded PCB equipped with two simple rectifier circuits which generate a DC voltage from the RF input. Figure  2 is a detailed photograph of the DUT. The DC output voltage is measured with optical voltage probes of type Langer AS110. These need a local voltage supply provided by a 9V alkaline battery. For brevity, only one of the PCB output voltages is considered throughout this work.
×
×
The simulation of BCI tests and generation of respective models, especially the injection probe, has been scope of many publications and is regarded as state of the art. The models used here were constructed on the basis of [ 10– 12] and related works referenced therein and were thoroughly validated by the authors before. But the simulation of injected current and DUT voltage for the presented setup yielded completely wrong results (compare Fig.  3 and Fig.  4) because the supply battery, hence the additional coupling paths over the battery wire and housing depicted in Fig.  2, were not respected in the original simulation project.
×
×
Scope of this work is the development of a battery model used as extension to the existing 3D simulation setup. Advantage of the full 3D simulation (in contrast to battery models based on equivalent circuits) is that the battery can be arbitrarily placed in the 3D setup as in the real environment, thus coupling from the PCB, harness, battery wire and ground plane are correctly depicted in simulation. Eventually, this will correct the simulated values as plotted in Fig.  3 and Fig.  4 from the short-dashed to the solid lines. Details on the simulation are given in Sect.  3.
Advertisement
Models were derived for two commercial 9V alkaline block battery (PP3) types of different manufactures, i.e. RS Pro and Panasonic 6LF22, whereas the figures in Sect.  2 account for the latter.

The generation of a 3D model requires full knowledge of the battery device. This means in particular its internal buildup and cell material, which are both unknown at the beginning. The model is developed in two stages:
The simulation model needs to be built up from the inside to the outside to minimize the number of variable parameters and continuously ensure that all parts of the model reflect real conditions. Consequently, the modeling approach is presented in same order in this work. The detailed interior structure is found by dismantling the battery. This unfortunately makes the modeling a destructive process. Hence, measurements need to be conducted in reverse order (dismantled battery last) to ensure that all measurement data corresponds to a single battery.

2.1 Measurement and simulation of battery cell block without housing

The Alkaline cell size and material of course has a major impact on the battery impedance and therefore needs precise modeling. Respecting the cell buildup and material in all detail would result—for the intended application—in a far too complex simulation model (and too high measurement effort). A solution to this problem is to replace the complete cell with an equivalent cell material as presented in [ 8]. The impedance of the real battery cell is determined by measurement. In simulation, the cell is represented by a simple solid block with an equivalent material which properties are fitted, so that the simulated cell shows the same behavior as the measured one. To determine this equivalent cell material the battery cell needs to be investigated free from all other battery components to exclude as many undetermined impact factors as possible.

In [ 5] the usage of the so-called shunt-through method [ 13] is proposed to determine a battery’s cell impedance (on example of a single Lithium-ion 18650 cell in the referenced work) by its scattering parameters (S-parameters) measured with a VNA. This method is claimed to provide high accuracy for low impedances over a wide frequency range. We used same method but measured the impedance of the complete battery block consisting of 6 series-connected cells at once. The measurement setup is shown in Fig.  5. The used test fixture provides SMA coaxial connectors with well-defined reference plane to connect the VNA. The center pins of both SMA at the right side are soldered to the battery’s plus pole and wired to VNA ports 1 and 2. The SMA shields connect to the fixture serving as common ground reference. At the left side, the battery’s minus pole connects directly to the fixture, i.e. common ground, via the SMA body. The inputs of the used VNA Copper Mountain S5085 withstand 35 V DC hence no DC blocks were needed. Following [ 5], the battery impedance Z bat is calculated from the measured transmission coefficient S 21 by ( 1), where Z 0 is the characteristic impedance of 50 \(\Omega \).
$$ Z_{bat} = \frac{1}{2} Z_{0} \cdot \frac{S_{21}}{(1- S_{21})} $$
(1)
×

Same setup as shown in Fig.  5 was realized with the 3D EM software ANSYS HFSS to gain Z bat by simulation. For brevity no picture is given at this point, however Fig.  8 already gives a sectional view of the final battery model. For the equivalent cell material, we defined a frequency-dependent conductivity as depicted in Fig.  6 and relative permittivity and permeability of 1. This is in contrast to [ 8] where the cells (of NiMH, LiPo and LiFePO4 battery types) were emulated by selecting frequency-constant values for conductivity and permeability. The resulting simulated cell block impedance is compared to the measured values in Fig.  7 for a frequency range of 10 kHz to 1 GHz. Besides the cell conductivity, the separation between cells and the area of the aluminum cell-to-cell connections (compare Fig.  8) significantly impacts the resonance around 270 MHz.
×
×
×

2.2 Measurement and simulation of complete battery

After definition of the series connected battery cells, the complete battery was assembled in simulation as depicted by Fig.  8 and tested against measurement with the setups of Fig.  9 and Fig.  10, respectively. Degrees of freedom in the simulation model which were adjusted in this step are in particular the distance between the aluminum strap (connecting the minus pole at the battery bottom to the plug at the top) to battery cell block and housing, as well as thickness, coating and exact position of the steel foil housing and the geometry of the wire clip connector. Measurements of the input reflection coefficient S 11 were conducted with two different batteries of same type (Panasonic 6LF22) and are compared to simulation in Fig.  11. The simulation reflects well the general trend over frequency, although the deep resonance at about 530 MHz is underestimated by roughly 7 dB. However, as the main frequency range of interest for the BCI test is only up to 400 MHz, this deviation was not further investigated.
×
×
×

The developed battery model was verified by inclusion to the 3D simulation setup of the complete BCI test as illustrated in Fig.  1. As already mentioned, when the battery is neglected the BCI test simulation is far from the expected results (compare the dashed lines of Fig.  3 and Fig.  4). Now, the battery’s 3D model is added to the simulation project and connected to respective pins on the floating PCB in the illustrated manner, which comes as close as possible to the actual placement visible in Fig.  2. The output from 3D simulation is an 18-port S-parameter matrix exported as Touchstone file. One port is provided for the BCI probe’s connector plus for each (relevant) component footprint on the PCB. Because the PCB circuitry involves an active component, namely the diode of the rectifier circuit, harmonic balance (HB) analysis was used for frequency domain simulation of the complete system. A simplified view of the testbench is Fig.  12. The power input to the BCI probe was extracted from the measurement protocol provided by the test laboratory and sourced in simulation with a frequency-controlled power source. The optical voltage probes were modeled by differential voltage probes with input impedance of 10 pF parallel to 1 M \(\Omega \). During the real BCI test, the copper rod current was captured in 5 cm distance from the PCB with a monitoring probe. For simplicity, this current was assumed to equal the PCB input current in simulation. The final simulation results are given by the solid lines in Fig.  3 and Fig.  4. By respecting the battery’s impact, all resonance frequencies and signal amplitudes are correctly shifted to the measured values, but for a deviation of the peak current at roughly 290 MHz. 3D simulation of the complete BCI setup including battery took approximately 4:40h on a laptop PC with Intel I7-7820HQ quad core and 32 GB RAM.
× 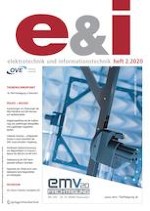