This paper extends previously proposed memory-based passivity approach (MBPA) to 6 degrees-of-freedom (DOF) haptic interactions. By introducing 6-DOF virtual proxy and virtual object, connected with haptic interaction point (HIP), we can extend MBPA to 6-DOF, including torque vs. orientation passivity. To find a passive relationship between positions vs. force graph, instead of position itself, we use position error between the center of mass of the virtual proxy and virtual object. For the angle vs. torque graph, we use angular displacement between the unit vector of the virtual proxy and virtual object instead of angle itself. After the extension, position/angular resolution became a problem, since it depends on configuration of the haptic device. Position resolution should be fixed, and real-time monitoring of every single position change is strongly required in previous MBPA. However, those are difficult requirements when the approach is extended to multi-DOF, especially 6-DOF including orientation. This paper revises the data saving procedure and force bounding mechanism to allow variable position resolution. Position value instead of simple incremental integer is saved together with matched force data into memory space, which allows to interpolate corresponding force value at the releasing trajectory even though it is not in the saved data list. This generalized framework of 6-DOF haptic rendering is evaluated according to simulation results. 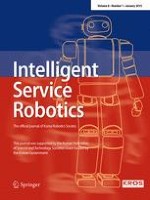