In this article, a class of upwind schemes is proposed for systems, each of which yields an incomplete set of linearly independent eigenvectors. The theory of Jordan canonical forms is used to complete such sets through the addition of generalized eigenvectors. A modified Burgers’ system and its extensions generate δ,δ′, δ″,⋯,δn waves as solutions. The performance of flux difference splitting-based numerical schemes is examined by considering various numerical examples. Since the flux Jacobian matrix of pressureless gas dynamics system also produces an incomplete set of linearly independent eigenvectors, a similar framework is adopted to construct a numerical algorithm for a pressureless gas dynamics system. 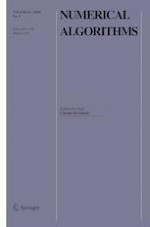 Parameter-robust preconditioning for the optimal control of the wave equation