This paper studies the satisfiability problem of poly-power constraints (conjunctions of poly-power equations and inequalities), in which poly-powers are univariate nonlinear functions that extend integer exponents of polynomials to real algebraic exponents. To solve the poly-power constraint, we present a sound and complete procedure that incorporates conflict-driven learning with the exclusion algorithm for isolating positive roots of poly-powers. Furthermore, we introduce a kind of optimal interval-splitting, based on the Stern–Brocot tree and on binary rational numbers respectively, so that the operands occurring in the execution are chosen to be as simple as possible. The solving procedure, thereby, turns out to be promisingly efficient on randomly generated examples. 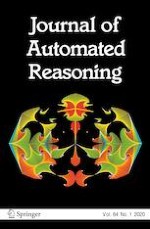 Automating Free Logic in HOL, with an Experimental Application in Category Theory

A Prover Dealing with Nominals, Binders, Transitivity and Relation Hierarchies

Politeness and Combination Methods for Theories with Bridging Functions