One of the main challenges in FDM 3D printing development is a limited understanding of the physics of the process [ 34]. Models of the FDM process describing the dynamics of material extrusion and melt are essential for intelligent monitoring and control for AM machines. Deriving the relationships between FDM process parameters and nozzle clogging conditions are important for monitoring the quality of 3D printed parts in terms of geometrical accuracy and mechanical strength. To model the process relationships, let us consider direct FDM extruder of Makerbot Replicator 1 3D printer presented in Fig.  1. As can be seen, it consists of two main blocks, namely filament feeding mechanism and filament melting mechanism. The filament feeding mechanisms has a gear, and a roller pushed towards the gear via spring-loaded lever. The filament melting mechanism consists of a heating block and a nozzle. Thus, the two main elements of FDM process are filament feed dynamics and filament melt dynamics. The forces acting on the filament along the vertical direction are:
$$F_{y} = F_{\text{GF}} - F_{\text{R}} - F_{\text{BP}} ,$$
(1)
where \(F_{\text{GF}}\) is gear-feed force, \(F_{\text{R}}\) is rolling friction between roller and filament, \(F_{\text{BP}}\) is backpressure force. Derivation of these forces is discussed in the following subsection.
×

Commercially available extrusion mechanisms in FDM 3D printers are designed to feed thermoplastic polymer filaments with diameters ranging from 1.5 to 3 mm through a heated liquefier and then extrude onto a build platform. The filament is inserted into a guide tube and pushed towards a heater via gear-roller extrusion mechanism, as shown in Figs.  1 and 2. An extruding gear is powered by a stepper motor and a roller is pushed by a spring via lever to create a pressure on the filament to avoid slippage. The filament is in tension above the gear-roller mechanism and pulls the material from the spool. After the filament enters the gear-roller mechanism, it is in compression and pushed through a heated liquefier towards the nozzle. The gear-roller extrusion feed rate is controlled to keep the volumetric flow rate of filament constant. The gear-feed force and the rolling friction between roller and filament are opposite to each other, and the resultant of these two forces is pushing the filament into the liquefier. The derivation of these two forces is presented as follows. First, gear-feed force depends on the torque of the extruding stepper motor:
$$F_{\text{GF}} = \frac{{T_{\text{extr}} }}{{r_{\text{gear}} }},$$
(2)
where \(T_{\text{extr}}\) is extruding torque, \(r_{\text{gear}}\) is radius of extruding gear. Second, friction force between roller and filament is rolling friction:
$$F_{\text{R}} = \mu_{\text{R}} N_{\text{R}} ,$$
(3)
where \(\mu_{\text{R}}\) is coefficient of rolling friction between roller and filament, \(N_{\text{R}}\) is normal force between roller and filament. The normal force \(N_{\text{R}}\) depends on the spring characteristics and the lever geometry of an extruder:
$$N_{\text{R}} = F_{C} \cos \delta = F_{A} \frac{AB}{BC}\cos \delta = F_{A} \frac{AB}{BC}\cos \left( {90 - \beta } \right),$$
(4)
or
$$F_{\text{R}} = \mu_{\text{R}} F_{A} \frac{AB}{BC}\cos \left( {90 - \beta } \right),$$
(5)
where \(F_{C}\) is a force exerted by a spring via lever at point \(C\) and it is perpendicular to \(BC\), \(\delta\) is angle between \(F_{C}\) and \(N_{\text{R}}\), \(F_{A}\) is a vertical force exerted by a spring at point \(A\), \(AB\) and \(BC\) lever geometrical distances illustrated in Fig.  2, \(\beta\) is angle between \(AB\) and \(BC\). In summary, the filament extrusion dynamics includes:
1.
Gear-feed force, which is a function of a stepper motor and an extruder gear parameter; and
2.
Rolling friction force, which is a function of a roller friction coefficient and lever-spring characteristics.
×

To verify the above mentioned theoretical model, the current-based nozzle condition monitoring technique in 3D printing was developed. According to the proposed model, when the nozzle starts to clog during 3D printing, its effective nozzle diameter decreases, and the current of extruding motor will change. Thus, the monitoring technique was required to track the current of extruding motor in FDM 3D printer during fabrication for identifying the nozzle clogging conditions. The block diagram of the process monitoring board used for the current study is presented in Fig.  4. As can be seen, it consists of:
×
The assembly of the above-mentioned elements on a PCB board is shown in Fig.  5. The NEMA17 Nano Zero Stepper board was manufactured by The Island of Misfit Electronics. Diametrically Magnetized NdFeBr magnet was glued to the back of the extruding motor shaft. The magnet was mounted accurately in the centre and was calibrated later to correct minor misalignments. Next, the process monitoring board was mounted by bolts to the back of the extruding motor so that the magnet was right under the encoder at the distance of 1–2 mm. In addition, standard stepper driver used for FDM 3D printer’s extruding motor was removed from the controller board, and A4954 motor driver was connected to the control board instead. The attachment of the process monitoring board to the extruding motor of FDM 3D printer is shown in Fig.  6.
×
×
The working principle of the current-based nozzle condition monitoring method is as follows. The extruding feed rate is commonly set before any FDM 3D printing operation by the user, and it keeps constant until part is fully fabricated. Therefore, process monitoring board was set to operate in a velocity mode. While the extruder maintained the constant feed rate set by the user, the position of the extruding motor’s shaft was tracked by the encoder. When the nozzle started to clog, the filament extrusion started to become more difficult, resulting in position error of the extruding motor shaft. Next, the position error of the motor shaft was sent to the microcontroller. To keep the feed velocity constant, the microcontroller sent corrective signals to the motor driver, by increasing the current to overcome the difficulty in extrusion. This current increase was monitored by a Yageo PT1206FR-070R2L current sensing resistor, and the real-time data were sent to the computer via USB port.

This study proposed a theoretical model for current-based nozzle condition monitoring technique in 3D printing. As presented in previous section, the theoretical modelling of FDM 3D printing process showed a very accurate correlation with the experimental tests. It was found that the proposed theoretical model can efficiently estimate the current of the extruding motor during nozzle clogging in FDM 3D printing. The findings of this study indicate that the nozzle clogging decreases the effective nozzle diameter, makes the extrusion more difficult and affects the current of the extruding motor. When the extruding mechanism is fitted with a current-based monitoring system, the nozzle clogging conditions can be tracked relatively accurately using the proposed theoretical model.
The proposed model and the current-based nozzle condition monitoring method is in contrast to the earlier works [ 21, 27, 32], where the AM process monitoring methods were purely empirical. On the other hand, the results of the present research are similar to the study developed by Bukkapatnam and Clark [ 33], where they introduced a theoretical model-based vibration monitoring in 3D printing. The difference between the present work and their study is focussing on the extrusion process and the nozzle clogging, but their work focussed more on the severe vibrations of the 3D printer machine structure.
The significance of the present work is the ability to predict the nozzle clogging conditions in FDM 3D printing before any serious process failure might happen. The overall differences between the theoretical estimations and the experimental results are in the range of 8%. The present method is based on theoretical dynamics of FDM extrusion process, and it can be very promising for developing nozzle condition monitoring and control techniques in FDM 3D printing.
There are several limitations of the present study. First, theoretical calculation results of the extruding motor current were slightly different from the experimental results in the maximum range of 8%. This is because the theoretical model treats the filament diameter as ideally constant value. However, the actual diameter of the filament tends to vary due to the manufacturing limitations and tolerances, for example, tolerance of filaments used in present study was ± 0.05 mm. To overcome this limitation, the actual diameter of the filament can be measured at the location before it enters the heated liquefier. The actual filament diameter measurement can be achieved using computer vision system, similar as in work presented by Greeff and Schilling [ 38], where they measured the filament width using a low-cost USB microscope video camera and image processing. Then, the actual filament radius values \(R_{1}\) should be placed in Eqs. ( 7)–( 9) and subsequently used for estimating the current of extruding motor. Second, the present model is based on most common FDM system based on a wire feeding mechanism and a heated liquefier. For other types of systems, for example, with pressurised material heating tank, the model can be applied similarly. For example, the additional pressure in the pressure tank can be written as \(\Delta P_{4}\) and added into Eq. ( 12). The remaining calculations can be done similarly as in the model proposed in this study. As a result, to have a reliable and good 3D printing results with the pressurised tank, the pressure is to be maintained constant in the material heating tank. If the pressure in the tank is constant, the decrease in effective nozzle diameter (or nozzle clogging) has a direct effect on the current of extruding motor.
Future work might be focussed on the usage of the proposed model for nozzle condition monitoring and control in FDM 3D printing for avoiding process failures. In addition, the proposed dynamic model would be tested with a PEEK polymer to evaluate the effect of temperature on results.

Nozzle clogging is one of the significant process errors in FDM 3D printing, because it has a direct effect on the quality of 3D printed part in terms of mechanical strength and geometrical accuracy. This work proposed a dynamic model for current-based nozzle condition monitoring in FDM 3D printing, and it is based on a theoretical relationship between the extruding motor current and the nozzle clogging condition. To summarise the results of the present study, the following recommendations are suggested.
In conclusion, the findings of the current work can be one step towards developing nozzle condition monitoring and control in FDM 3D printing for avoiding process failures as the study is based on the fundamental relationships between FDM process parameters and the nozzle clogging.

On behalf of all authors, the corresponding author states that there is no conflict of interest.
Open AccessThis article is distributed under the terms of the Creative Commons Attribution 4.0 International License ( http://​creativecommons.​org/​licenses/​by/​4.​0/​), which permits unrestricted use, distribution, and reproduction in any medium, provided you give appropriate credit to the original author(s) and the source, provide a link to the Creative Commons license, and indicate if changes were made. 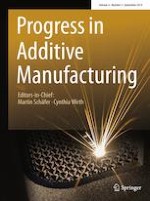 3D-printing and advanced manufacturing for electronics