Create an alert for Calcolo now and receive an email for each new issue with an overview and direct links to all articles.

Back to the search result list
​
print
Table of Contents
​
insite
Issue archive
​
archive
​
insite
Print
​
print
​
share
next article A new iterative method for solving a class of t...

The aim of this paper is to prove the preservation of the diffusive limit by a numerical scheme for the shallow-water equations with a generalized Manning friction source term. This asymptotic behavior coincides with the long time and stiff friction limit. The adopted discretization was initially developed to preserve all the steady states of the model under concern. In this work, a relevant improvement is performed in order to preserve also the diffusive limit of the problem and to exactly capture the moving and non-moving steady solutions. In addition, a second-order time and space extension is detailed. Involving suitable linearizations, the obtained second-order scheme exactly preserves the steady states and the diffusive behavior. Several numerical experiments illustrate the relevance of the designed schemes. 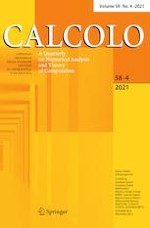 Velocity-vorticity-pressure formulation for the Oseen problem with variable viscosity

On decompositions and approximations of conjugate partial-symmetric tensors