A Moral Cleansing Process: How and When Does Unethical Pro-organizational Behavior Increase Prohibitive and Promotive Voice | springerprofessional.de Skip to main content
SEARCH MENU 1 2 3 4

In this study, we draw on moral cleansing theory to investigate the consequence of unethical pro-organizational behavior (UPB) from the perspective of the actors. Specifically, we hypothesize that after conducting UPB, people may feel guilty and tend to cleanse their wrongdoings by providing suggestions or identifying problems at work (i.e., prohibitive and promotive voice). We further hypothesize that the above relationship is moderated by the actor’s moral identity symbolization. We conducted three studies, including experiment and surveys, to test our hypotheses. Results of these studies show consistent support to our hypotheses. In particular, individuals reported more felt guilt after conducting UPB, and they tended to compensate with more prohibitive and promotive voice subsequently. In addition, the indirect relationship from UPB acting to both voice behaviors via felt guilt was stronger for people with a high level of moral identity symbolization. Theoretical and practical implications are discussed.
Advertisement
previous article Team Over-Empowerment in Market Research: A Virtue-Based Ethics Approach 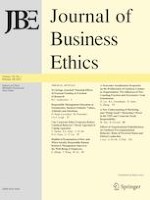 Keeping Teams Together: How Ethical Leadership Moderates the Effects of Performance on Team Efficacy and Social Integration

An Ethical Inquiry of the Effect of Cockpit Automation on the Responsibilities of Airline Pilots: Dissonance or Meaningful Control?

No Strings Attached? Potential Effects of External Funding on Freedom of Research