Elastic Optical Networks (EON) have recently attracts researchers, as one of the most promising technologies for flexibly assign spectrum resources to link requests,and benefits from higher spectral efficiency and system capacity. The spectrum assignment problem is dividing the bandwidth into frequency slices and connecting requests with different capacities using different numbers of frequency slices to transfer data. On the other hand, one of the most important issues in cloud computing is to model the problem as a multilayer optimization problem, which is well-known as Multi-Protocol Label Switching (MPLS). In this paper, the network is considered as a two-layer network in which the physical layer is the optical fiber layer on elastic optical network layer. In elastic optical network (EON), the network spectrum is divided into smaller spectrum slots to improve the spectrum utilization, but the high-quality spectrum division also complicates the routing and spectrum allocation (RSA) problem. In previous researches, RSA has been considered independent from MPLS. In this paper, a new mathematical model for MPLS is introduced in which the optical fiber layer joints with RSA. The objective function is defined as minimizing the total allocation costs. To verify the model, the optimal objective functions of different values of the capacities of modules in both layers are compared. It is shown that the combination of these two problems reduces the total allocation costs for large values of optical slices and could increase it in cases where the number of optical slices is small while the number of modules is high.
Advertisement 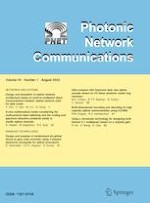 Using a nanoscale technology for designing fault-tolerant 2:1 multiplexer based on a majority gate