A novel 3d transition metal high-entropy alloy (3d TM HEA), Al0.5CoCrCuV, was designed through the substitution of Fe and Ni by V in the base alloy Al0.5CoCrCuFeNi, and then was fabricated by arc-melting. The phase components of the studied alloy in the as-cast and annealed conditions are the FCC + BCC dual phases, unlike the single FCC phase component of the precursory base alloy. In the currently studied alloy, the volume fraction of the BCC phase reaches 87% and it acts as the dendrites, while the FCC phase is secondary and is composed of Cu-rich phases associated with the net-like framework. The as-cast and annealed alloys both exhibit a relatively promising synergy in strength and ductility. Specifically, the yield strength of the as-cast alloy reaches as high as 1935 MPa with an elongation of 4.7%, while it decreased slightly to 1825 MPa after annealing with a negligible change in the elongation. In this work, phase constitution, phase morphology and solid solution strengthening were conducted to uncover the mechanical behavior.
Advertisement
previous article A Novel Cu-Containing Al0.5CrCuFeV High-Entropy Alloy with a Balanced Strength-Ductility Trade-Off
next article Interaction of Precipitation and Recrystallization in Cold-Rolled Al–Er and Al–Er–Zr Alloys 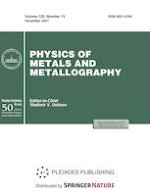