Integration of Mobile Ad hoc NETworks (MANETs) with the Internet has been paid immense attention in the field of heterogeneous networks. In MANET some intermediate nodes called Internet Gateways (IGs) are responsible for sending the data traffic of source nodes towards the fixed nodes in the Internet. The key issue considered while selecting IG nodes is its optimised throughput with the reduced delay in resource constraint mobile nodes. In this paper, a genetic algorithm inspired Delay Sensitive Gateway Selection (DSGS) scheme is proposed considering the issue of network delay by minimising the total distance travelled by the source nodes to the gateway. The performance of the proposed GA-based DSGS scheme is studied using a comparative approach. The simulation results demonstrate that the proposed scheme significantly outperforms the conventional schemes and is capable of achieving higher network throughput while minimising the end-to-end delay.
Advertisement 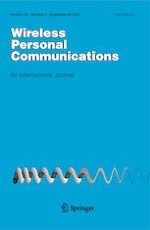