The RCPSP constitutes a fundamental problem in the field of discrete optimization because it subsumes and combines various hard problems, such as partition, packing and coloring, into one common optimization problem. It has extensive applications in project planning, production industry, supply chain management, logistics and health care, see, for example, Artigues et al. ( 2013), Cardoen et al. ( 2010) and Weglarz ( 2012). Exact solution methods for the RCPSP, in its general form, exist since the late 1960s with a first work of Johnson ( 1967) who proposes a branch-and-bound algorithm for the RCPSP. Until today, much research has been invested into solving the RCPSP, its variants and extensions, see, for example, Herroelen et al. ( 1998), Brucker et al. ( 1999), Stork ( 2001), Kolisch and Hartmann ( 2006), Hartmann and Briskorn ( 2010).
Advertisement
The RCPSP is also one of the computationally most challenging combinatorial optimization problems and, in general, very hard to solve to optimality. One branch of research studies different MIP models for the RCPSP where each model has its particular strengths and weaknesses. In general, one can distinguish the following MIP model types for the RCPSP: time-indexed, disjunctive and event-based models. In the following, we give a brief introduction to each model type.
Time-indexed models One of the first mathematical programming formulations for the RCPSP was given by Pritsker et al. ( 1969). In this model, the scheduling horizon is divided into discrete time steps \(\mathcal T = \{0,\ldots ,T\}\) where decision variables determine the start time of every job in \(\mathcal T\). Christofides et al. ( 1987) improve their model by stronger precedence constraints. The resulting model is often denoted as the time-indexed model (DDT). In its core, DDT is still very popular today for modeling the RCPSP and related problems because it provides a decently strong linear relaxation and can be solved quickly on instances of moderate size, see, for example, Bianco and Caramia ( 2013). Several approaches have been made for improving the basic DDT formulation, for example, by extended formulations (Mingozzi et al. 1998), fast lower bounds from min-cut computations (Möhring et al. 2003), strong cover cuts (Hardin et al. 2008) and non-singular transformations (Artigues 2017). The basic modeling idea of DDT can also be transferred to other variants of the RCPSP such as the multi-mode case (Zhu et al. 2006) and for flexible resource profiles (Naber and Kolisch 2014). Despite the good general performance of DDT, the main drawback is that the model size scales with the scheduling horizon T. Thus, for problems where T is large, DDT becomes computationally intractable. This motivates to study models whose size is strongly polynomial in the number of jobs, such as event-based models.
Disjunctive models Alternatively, the RCPSP can be modeled explicitly by start time variables \(S_j\) for every job j. In this model, resource conflicts are settled by decision variables that enforce disjunctions of precedence constraints of either \(S_i + p_i \le S_j\) or \(S_j + p_j \le S_i\) between two jobs i,  j. Olaguibel and Goerlich ( 1993) study an exponential model that requires such a disjunction for at least two jobs in every incompatible job set whose jobs cannot all be scheduled in parallel. Artigues et al. ( 2003) overcome the exponential number of inequalities by a continuous resource flow extension that generates the precedence between the jobs and finally leads to a compact formulation. In both models, disjunctions are formulated by ‘big-M’ inequalities that lead to very weak linear relaxations. Therefore, disjunctive models are not preferred for instances that contain many jobs.
Event-based models Similar to positional assignment formulations for single machine scheduling (Lasserre and Queyranne 1992; Queyranne and Schulz 1994), in which every job gets assigned a position in the single machine sequence, Zapata et al. ( 2008) use a similar event-based modeling concept to solve the multi-mode RCPSP. As for positional assignments, event-based models assign a start event (or position) to every job but, in contrast, they also assign an end event for every job since jobs may run in parallel. Additional continuous time variables describe the time when an event occurs. Since every job starts and ends exactly once, at most 2 n events need to be considered that finally leads to a compact formulation. Koné et al. ( 2011) revisited this event-based modeling concept and introduced two new models OOE and SEE for the standard RCPSP. Notably, event-based models do not involve as large constants as the disjunctive models. However, all known event-based models still suffer from weak linear relaxations, but they represent the overall best alternative to DDT when the scheduling horizon becomes large.
Advertisement
Other exact solving methods Several other exact solving approaches exist for the RCPSP, mainly of the branch-and-bound type, see, for example, Brucker et al. ( 1998), Christofides et al. ( 1987), Demeulemeester and Herroelen ( 1997), Dorndorf et al. ( 2000), Heilmann ( 2003), De Reyck and Herroelen ( 1998), Sprecher and Drexl ( 1998), Zhu et al. ( 2006). These algorithms primarily differ in their branching rules, branching order, dominance rules, domain propagation and considered lower bounds. More recently, constraint programming (CP) is used to solve the RCPSP that combines branch-and-bound with strong filtering algorithms (Vilim 2011; Baptiste et al. 2012; Tesch 2018) and lazy clause generation (Schutt et al. 2013).

In this paper, we investigate the polyhedral relationships between the event-based models and the time-indexed model. First, we revisit the models OOE and SEE of Koné et al. ( 2011), propose stronger valid inequalities and discuss the impact on their LP-relaxations. Moreover, we introduce a new event-based model that we call the Interval Event-Based Model (IEE) which generalizes the modeling ideas of OOE and SEE. In particular, we reveal linear transformations between all three models OOE, SEE and IEE from which we deduce the strict domination order \(IEE \succ SEE \succ OOE\) for their linear programming relaxations, meaning that IEE has the strongest LP-relaxation followed by SEE and OOE. Nevertheless, we show that the integrality gap of IEE (thus for OOE and SEE) is unbounded in general. Next, we investigate the polyhedral relationship between the event-based models and the time-indexed model. We show that DDT can be constructed by subsequent expansion and projection of the solution space of IEE.
In total, this yields a unified view on the whole class of event-based and time-indexed models for the RCPSP. Finally, we propose additional preprocessing steps to improve upon the computational performance of all presented models on RCPSP instances of the well-known PSPLIB test library (Kolisch and Sprecher 1997). With this work, we hope to shed some light on the polyhedral properties and relationships between some of the many formulations for the RCPSP that exist until now.

Our paper is organized as follows. Sections 2 and 3 examine the models OOE and SEE of Koné et al. ( 2011) and their mutual polyhedral relationship. In Sect.  4, we introduce the new Interval Event-Based Model (IEE) and study its relationship to OOE, SEE and DDT. In Sect.  5, we propose additional preprocessing steps to improve upon the solving time of the event-based models. In Sect.  6, we finally compare the computational performance of the presented models and draw a conclusion in Sect.  7.

Before we proceed with our computational results, we apply additional preprocessing steps that reduce the model sizes and improve the basic formulations of the three models OOE ( u-variables), SEE ( x,  y-variables) and IEE ( z-variables).

5.1 Reducing the number of events

An optimal solution to any of the event-based models does not necessarily need all events \(\mathcal E = \{1,\ldots ,n\}\) to allocate all the jobs. Therefore, one approach to reduce the model size of the event-based models is to decrease the number of events. Hence, we ask whether there exists an optimal solution to the RCPSP that uses at most k events or, more generally, if there exists any solution to the RCPSP that uses at most k events. Let us denote the latter decision problem as k-EP. We show that k-EP is already NP-complete by performing a reduction from the bin packing problem (BPP).
In the BPP, we are given a set of items \(\mathcal I\) where each item i has a weight \(w_i\). Moreover, we are given a set of bins \(\mathcal B\) where each bin b has capacity C. The decision problem k-BPP of BPP asks whether there exists an assignment of all items to at most k bins such that the total item weight in every bin does not exceed the capacity C. The k-BPP is a well-known NP-complete problem and contains the partition problem as a special case, see Garey and Johnson ( 2002). We show the same for k-EP.
Proposition 7
k-EP is NP-complete.
Proof
We perform a reduction from k-BPP. Given a solution to the RCPSP, the number of used events can be retrieved in polynomial time, so k-EP is in NP. Assume an instance of k-BPP and convert it into an instance of k-EP by setting \(\mathcal J = \mathcal I\), \(p_j = 1\) for all \(j \in \mathcal J\) and consider one resource with capacity \(R = C\) and \(r_{j} = w_j\) for all \(j \in \mathcal J\). Using this construction, there exists a feasible bin packing of size at most k if and only if there exists a feasible RCPSP schedule that uses at most k events or has makespan at most k, respectively. Hence, k-BPP yields a ‘yes’ instance if and only if k-EP yields a ‘yes’ instance which shows the proposition. \(\square \)
Proposition  7 reveals that reducing the number of events is a non-trivial issue. In particular, the actual question of deciding whether there exists an optimal schedule with at most k start events is NP-hard because checking whether a given schedule is optimal cannot be done in polynomial time, unless \(P = NP\). Note that this does not prevent from finding polynomial-time certificates for a smaller number of events. Since we focus on exact solutions to the RCPSP, we use the complete event set \(\mathcal E = \{1,\ldots ,n\}\) for our computational results.

In all three models OOE, SEE and IEE, the time constraints ( 6), ( 23), ( 38) contain the largest number of inequalities and they are also responsible for the generally weak LP bounds. In the following, we present two strengthening approaches.

In this article, we studied the class of event-based models for the RCPSP and gave a complete characterization of their mutual polyhedral relationships and their connection to the common time-indexed formulation. Our proposed improvements made it possible to approach more difficult test sets of the PSPLIB by using the event-based models. It is of interest to further improve upon the solving performance of event-based models. This can be done, for example, by incorporating more complex on-top algorithms, such as Lagrangian relaxation that exploits the integrality of the subproblems (RSEE), or by considering model-specific properties, such as the split property of IEE, to solve the LP-relaxations faster.

Open Access funding provided by Projekt DEAL.
Open AccessThis article is licensed under a Creative Commons Attribution 4.0 International License, which permits use, sharing, adaptation, distribution and reproduction in any medium or format, as long as you give appropriate credit to the original author(s) and the source, provide a link to the Creative Commons licence, and indicate if changes were made. The images or other third party material in this article are included in the article’s Creative Commons licence, unless indicated otherwise in a credit line to the material. If material is not included in the article’s Creative Commons licence and your intended use is not permitted by statutory regulation or exceeds the permitted use, you will need to obtain permission directly from the copyright holder. To view a copy of this licence, visit http://creativecommons.org/licenses/by/4.0/. 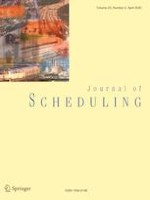 Broadcasting a file in a communication network