» Get access to the full-text
Important notes
Communicated by Angus Jackson.

Horseshoe crabs are the only extant xiphosurans and are believed to be morphologically unchanged for more than 200 million years. Of the four extant species namely, Limulus polyphemus, Tachypleus tridentatus, Tapinauchenius gigas and Carcinoscorpius rotundicauda, the latter three are found in Asian waters. Recent evidences showed that Asian horseshoe crabs are facing serious threats such as degradation of their spawning grounds and habitat, environmental pollution, overexploitation as a culinary delicacy and biomedical bleeding practices. Baseline data on the distribution and existing population of the wild horseshoe crabs remain poorly known in several Asian regions. Several studies have clearly revealed that pressure due to over-fishing of wild stock has increased tremendously in the last decade. Due to an increase in demand for Tachypleus Amebocyte Lysate (TAL) analogous to Limulus Amebocyte Lysate (LAL) in the United States, there is an urgent need to comprehensively address their fishing and conservation measures in the Asian region. This review addresses the overall studies on three species of Asian horseshoe crabs in relation to their fishing practices, local exploitation of their wild stock either for human consumption (or) by biomedical industries. The authors have structured the discussion on an international scale to address the existing problems in fishing and conservation of horseshoe crabs. Since no specific regulatory force or legislative protection act or a policy to preserve their natural stock are available to this date, this paper strongly recommends representative countries to include horseshoe crabs under their wildlife protection act to avoid further unsustainable exploitation of their wild populations. 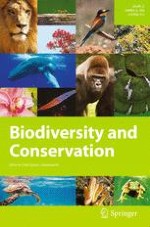 When introduced equals invasive: normative use of “invasive” with ascidians

Survival strategies of a frugivore, the sun bear, in a forest-oil palm landscape

Completeness of national freshwater fish species inventories around the world