The extensive growth in popularity of Internet of Things (IoT) has led to the generation of massive amount of data from several heterogeneous sensory devices. This has also led to the increase in energy consumption by these connected devices. Smart buildings are one such platform which are equipped with several micro-controllers and sensors, generating a huge amount of redundant information at their data acquisition level. As a result, real-time applications may not be efficiently executed due to latency delays at the cloud service end. This requires several devices at cloud service end to execute the massive amount of data generated by these sensors, which does not satisfy green computing criteria. In this context, a novel local processing mechanism (LPM) is proposed, which favors an improved IoT service architecture for smart buildings. From the perspective of green computing, the proposed LPM framework facilitates reduction of manifolds at data acquisition level of sensor nodes. This paper also addresses the concept of optimal use of sensors in a wireless sensor network (WSN) and estimates costs corresponding to non-Poisson and Poisson arrival of data packets at local processor using the well-known queuing model. We also provide an efficient algorithm for smart buildings using our expert Markov switching (EMS) model, which is a well known probabilistic model in the field of artificial intelligence (AI) for subjectively validating real sensory data sets (viz., temperature, pressure, and humidity). Further, it has been analyzed that the proposed EMS algorithm outperforms several other algorithms conventionally used for determining the state of large-scale dynamic sensor networks. The service cost of proposed model has been compared with conventional model under various stress conditions viz., arrival rate, service rate, and number of clusters. It is observed that the proposed model operates well by leveraging green computing criteria. Thus, in the aforementioned context, this paper provides thing-centric, data-centric, and service-oriented IoT architecture. 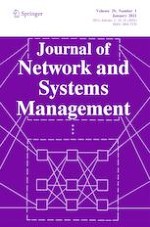 An Architecture for Creating Slices to Experiment on Wireless Networks