Genetic algorithm (GA) is an important and effective method to solve the optimization problem, which has been widely used in most practical applications. However, the premature convergence of GA has unexpected effect on the algorithm’s performance, the main reason is that the evolution of outstanding individuals multiply rapidly will lead to premature loss of population’s diversity. To solve the above problem, a method to qualify the population diversity and similarity between adjacent generations is proposed. Then, according to the evaluation of population diversity and the fitness of individual, the adaptive adjustment of crossover and mutation probability is realized. The results of several benchmark functions show that the proposed algorithm can search the optimal solution of almost all benchmark functions and effectively maintain the diversity of the population. Compared with the existing algorithms, it has greatly improved the convergence speed and the global optimal solution. 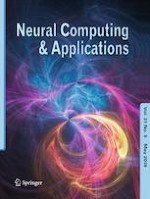 A new and efficient firefly algorithm for numerical optimization problems