This paper presents a mathematical model to predict the instantaneous temperature profiles in sealed or ceiling vented compartment fires. It has been observed in the existing research that in compartments without vertical opening, smoke fills the volume very soon indicating that the so-called one-zone type distribution forms quickly, and the gas temperature inclines linearly with height above the fire source. These characteristics are different from the smoke filling properties in enclosure fires with vertical openings. An assumption of linear distribution for temperature was introduced and a modified one-zone model was subsequently proposed in order to predict the transient smoke temperature profiles after the smoke fills the enclosure. With the knowledge of the heat release rate, the prediction model was established based on unsteady energy conservation by changing the heat loss factor using the semi-empirical models for fire plume and ceiling jet. Experiments including sealed and ceiling vented conditions were conducted to validate the model and the comparisons between measurements and predictions suggested the model can give fairly satisfactory estimations for the transient temperature profiles for both tests. 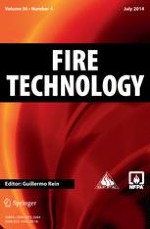 Erratum to: Predicting the Fire Resistance of Wood–Steel–Wood Timber Connections