This paper is concerned with a Stackelberg game of backward stochastic differential equations (BSDEs), where the coefficients of the backward system and the cost functionals are deterministic, and the control domain is convex. Necessary and sufficient conditions of the optimality for the follower and the leader are first given for the general problem, by the stochastic maximum principles of BSDEs and forward–backward stochastic differential equations (FBSDEs), respectively. Then, a linear quadratic (LQ) Stackelberg game of BSDEs is investigated under standard assumptions. The state feedback representation for the optimal control of the follower is first given via two Riccati equations. Then, the leader’s problem is formulated as an optimal control problem of FBSDE with the control-independent diffusion term. Two high-dimensional Riccati equations are introduced to represent the state feedback for the optimal control of the leader. The solvability of the four Riccati equations are discussed. Theoretical results are applied to a pension fund problem of two players in the financial market.
Advertisement
previous article Power Markets with Information-Aware Self-scheduling Electric Vehicles 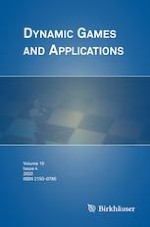 A Turn-Based Game Related to the Last-Success-Problem